T6 Pro
I want to lower my T6, don't have a clue how to do it and would like some advice and recommendations of where to take it, I like the alloys so was thinking of keeping the original tyre and wheel package, although I could be persuaded to change if I benefit from a better ride.
Also does the ride quality suffer with a lowered van. 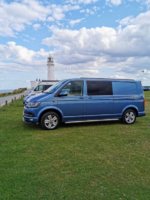 VIP Member
T6 Guru
Here’s mine lowered with Sportline springs, I find the ride is much better since lowering and handling improved even more when then Sportline wheels were added. I don’t find the ride uncomfortable with these but it just me in the van 90% of the time. 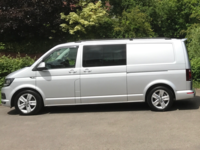 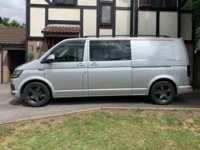 Jamroller said:
I want to lower my T6, don't have a clue how to do it and would like some advice and recommendations of where to take it, I like the alloys so was thinking of keeping the original tyre and wheel package, although I could be persuaded to change if I benefit from a better ride.
Also does the ride quality suffer with a lowered van.

This is one of the most posted about subjects on here I think and it's hard to tell which route to go down, but it really comes down to what you want from your setup and ultimately how much you want to spend.

If you just want a lower look then there are simple lowering springs, which are probably the cheapest option, but not necessarily going to give you the best ride quality (I had 50mm lowering springs and thought they were OK). You could go coilovers such as the Solow kit which will slam the van almost all the way to the floor, but doesn't have to, they start at about 80mm drop I think, but they'll be £1500. You could go H&R springs/koni dampers from @CRS Performance which give a reasonable drop and good comfort and handling (I haven't driven this, but lots of people say so). You could go B14 like I did from @BognorMotors and get up to 70 ish mm drop with what I would class as good comfort and great handling (I think they're awesome). You could choose any one of a handful of cheaper coil over kits that are almost as cheap as just springs.

There are so many options, but you need to know exactly what you want from your setup and most importantly what your budget is.

I've linked a couple of the guys who sell alternative options so you'll likely get some more advice from them too.

T6 Pro
Thanks for the reply Chris, look forward to hearing what the other guys say. I used to use my Kombi for work but its purely a day van now, the back is empty and carries no weight, I wanted to drop the stance slightly without any ride compromise, I was hoping to keep the same wheel tyre setup as i like these, if i can improve the ride quality by lowering slightly thats a win for me, i dont want something that has terrible ride quality and is in the weeds

Trade Member
T6 Legend
There are a lot of threads on here already on suspension. We run demo vans with B14s and H&R Springs, and soon we will have a Van wit KW's, so you are more than welcome to come and try one out. I still say bang for buck, the Bilstein B14s are the best set up out there, and we have fitted 100's of kits - It will transform the way your vehicle drives. Youy get the option to change the ride height, although many dont once fitted. They are most comfortable at full height.

We also have a black friday offer on a present too

T6 Pro
Thanks for the response, the van will be in Poole soon and I will be able to come across and discuss with you further

Trade Member
T6 Legend
No worries, so not far at all, let me know and you can come and have a go in all set-ups, and make your mind up

T6 Pro
Thanks appreciate that

Trade Member
T6 Guru
jam roller . The best advice with suspension is to spend as much as you can afford because buying cheap often comes at hi cost later .

40 to 50 mm drops we recommend Sport shocks and sport springs give the best ride , handling and comfort .
past 50 mm you Have to go with the Coil over kits , Bilstein approx. £1200 ( Hi Pressure Gas sleeve over kit ) and H&R / KONI kit £1400.00 ( this has damping adjustability so a bit more and more comfortable with Dual tube damping ) because of the drops these kits are all much firmer than sport kits .
You must log in or register to reply here.
Share:
Facebook Twitter Reddit Pinterest Tumblr WhatsApp Email Link
Top