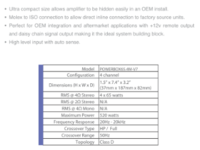 we had the speakers, but wanted a bit more boom . . . . we have the big amps and subs in the back not wired, so for now just a small plug and play solution for a bit more power . . . . This thread Stage-2.

So Stage-4 will be the final Big Kicker 15" Sub and Amps setup. (to be fitted)

The kit took ages to arrive from Skipton Car Audio . . .

using so sewing tools we were able to remove the tessa tape loom wrapping and expose the full loom.

we can see from the loom that the unit takes power from the same Radio feed and ground.

it also has a auto-switch-on function when it sees an audio signal from the Radio.

each end of the "T6" loom as the ISO block with all the wires linked, which is nice as we have the revers camera fitted.

you can see that most of the wires run direct appart from the 4x speaker wires. . . . They effectivly are cut from the Head-unit and run to the 4chl amp. then the amps 4chnl outputs are connected to the vans speakers . . . . power and ground is feed from the loom and switchon is auto . . .

all the connections were soldered and tessa taped, so being happy with that i tapped it back up . . .

.
Now over to the van, with the radio surround and radio removed we needed somewhere to put the amp. . . .

behind the glove-box seemed like a good location, so out it come . . . .

with everything connected loosely we run a test . . . . . everything worked great, with an obvious grain is audio power/level.

there was no way to cram the new breakout loom in any of the spaces behind the radio, we tried de-looming it and all sorts - it just wouldn't fit . . .

this was the problem - that rear of the plastic radio assembly housing . . . . there was loads of room behind it, but just couldn't get the wires there . . . . so the solution?

well three cuts with the multi-tool had that pesky rear plastic part removed and opened up a world of space behind the radio . . . =]

with everything refitted we were back to this - a fully OEM factory look, but with better speakers and small amp . . .

The stock radio in the van is 4chnl - but in this PV setup you only get 2chl speakers, so by adding rear speakers will help you get more power (all 4x chls) from the stock radio.

This amp is only 4x65w which is not much more than the stock radio - this is true, but you can keep the gain low on the Amp and run the radio at lower levels - so the van radio becomes a pre-amp for the Vibe amp . . . all levels are kept low, so you are way down below any distortion levels and have more power at the speakers.

you can gain more power out by adding the 3/4th channel speakers to the amp - this was my original intention . . . . .

But then i thought about getting a small under seat Sub and running the 3/4th channels via a low pass cross over to feed the sub. . . .

VIP Member
I bought Vibe Amp and wiring direct from manufacturer. Works ok, but when it shuts off i get speaker pop.

Aron said:
I bought Vibe Amp and wiring direct from manufacturer. Works ok, but when it shuts off i get speaker pop.
Click to expand...

Which amp and wire kit did you get?
A

Same as Skipton sells, but wiring has additional 2 plugs. Looks like Skipton joins them up to make wiring loom smaller.

VCDS User
Moderator
VIP Member
T6 Legend
Show them this thread, so they can see the radio and the loom I used..... as mine doesn't do it.
P

hi aron
did you receive a response from manufacturer regarding speakers pop ??? I ordered the same product this week and it bothers me a little ...
@ +
J

T6 Pro
I'm about to fit one of these to mine but i will be using preouts not the high level inputs as i have the Kenwood DNX512DAB so will bee leaving the speaker connections from the headunit disconnected. Bit of fun and excitement for next week in lockdown, hopefully my Focal ISU 200 speakers i fitted last week will be a bit more precise and less boomy with some more power to drive them. I'm not after massive output just a nice well rounded sound without a sub.

Its interesting to know about the plastic behind the stereo, i have always struggled with the wiring and gubbins space wise on my 5.1 so might have to look and see if it can be done on mine.

VCDS User
Moderator
VIP Member
T6 Legend
i had a nightmare trying to get the rear loom back in with the extra stuff.

I used the "multi-tool" to saw out part of the rear cage which gave loads of extra space . . .

VIP Member
T6 Pro
How much room was there where you fitted the amp? Thinking of getting the new 4x80 watts? 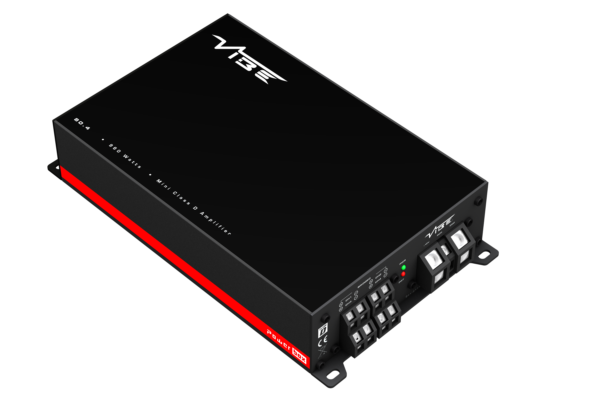 Pewt said:
How much room was there where you fitted the amp? Thinking of getting the new 4x80 watts?

Looking at the 4x80 it’s not plug and play, you would need to use preouts and run heavy gauge cables to power it. Personally I would stick with the plug and play one, I love mine.

but as above will need to make a loom for it, to make it plug and play.

not sure . . but it might draw more power that existing radio ISO block feed . . . so you may need to give it a seperate power and ground.

it has high level inputs.
it has AUTO Remote turn on,

VIP Member
T6 Pro
I've got a Kenwood headunit so should be no need for high level inputs .......defo be a bit more faff, the question is i suppose would it be worth it over the smaller plug and play 65w version ?