Moderator
VIP Member
T6 Legend
If not mate just persevere - I worked it out by trial and error - a bit of a pain doing it solo but once the earth wire was sorted, the rest were easy to work out.

And whilst you’ve got the lamps out, get yourself some LED bulbs for the reverse lights. Makes a big difference.
R

is this on led or oem lights?

Raimond said:
is this on led or oem lights?
Click to expand...

it is to fit LED tail lights.
R

can i take wiring that is going rear from the van that i took the taildoor from and put in my car,looks pretty easy to change?

Moderator
VIP Member
T6 Legend
I think you’re asking whether you can use the loom from your barn door and install it in your tailgate? From memory, I think a tailgate loom is longer, so I’d say no. But I never measured mine because I sold the doors with loom included, so it’s worth a try, by all means.
R

no i can see that the loom in my 2 door car is easy to change only 4 Connectors in front With the bcm, so the question is that if i take out the loom from the crashed car, and put it in my car i think it will be as a oem tailving car...anyone tryed that? then i think it only should be to code the car,and all Connectors should be ok...

VIP Member
T6 Guru
I only started my tailgate conversion 2 years ago, but with time off and not being able to go anywhere I thought I would do a bit more.

The lower cover plates have never been fixed in, they can't fall out but do rattle. Remove the rear light and you'll see just 2 fixing holes at the top. Mark the hole centres and drill an 8mm hole. 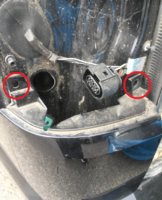 Paint the holes with some rust proof paint. I used hammerite black smooth. Fix the covers in place using an expanding plastic rivet. The correct ones are black but are idendical to the clips used to hole the ply panels in place, so I reused them.

VIP Member
T6 Guru
Next up is the tailgate support brackets. Without these the tailgate can wobble over bumps and causes a anoying squeek. It's supprising how much quiter the van is with them in.

Again, mark the centers and drill a 9.1mm (9mm with a wiggle), paint the body to protect it. 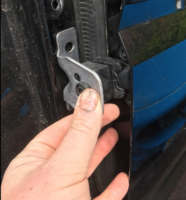 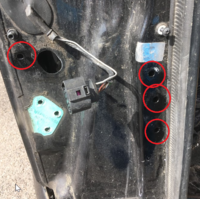 Use a rivet tool to insert 2 M6 rivet nuts. 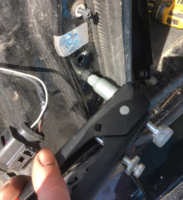 Then simply screw the brackets on. 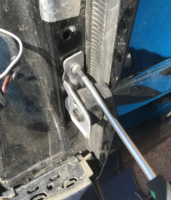 You'll notice the grommet hole for the harness to the rear barn doors is no longer used. I didn't have any grommets to cover them so I sealled them with some spare dynamat,

VIP Member
T6 Guru
I've had a few people contact me to ask how to wire up the tailgate lock, so here's how.

Why it's different
The barn doors uses a mechanical lock similar to the front doors. When you unlock the van, the body control module (BCM) sends power to all the locks for a fraction of a second which moves a solenoid in the locks to unlock them.
The tailgate uses electrical switched on the outside and inside of the tailgate, and sometimes one in the front door to tell the BCM to open the tailgate lock. Even though these switches are pressed, the BCM will only open the tailgate if the van isn't moving and the doors are unlocked.

How do you do it?
The wire telling the lock to unlock on the barn doors can't be used and needs to be cut and taped up. This wires does go back to the BCM but is still needed to unlock the front doors so don't change this wire on the BCM.
You need to add 2 wires to the tailgate connector from the BCM, one for the switches, and one for the lock.

Testing
Hopefully at this point your tailgate is working correctly.

To test the lock, you can manually trigger it using VCDS.

VCDS monitors if the latch is fully engaged or not. Select Measuring Blocks Group 006:

Could someone following this let be know if I've made any errors and I'll correct this post. Thanks to MMI to helping me understand this and getting mine working.
Last edited: 8 May 2020

VCDS User
VIP Member
T6 Legend
I am pretty sure that this coding modifications with catch @Deaky 's attention .

VIP Member
T6 Guru
Connecting the Heated Rear Screen.
This sounds easy but it was a pain. You need to change the heater controls for a matching unit but with the extra button for the heated rear screen. This is simply plug and play and no wiring is needed. It uses CAN to send a message to the BCM to turn on the rear screen or not.
I brought a unit from an old Golf for £10 and took minutes to swap over.

You can check with VCDS through adaptions if the switched is pressed and recognised by BCM.​
You now need to run 1x 2.5mm^2 cable from Pin73 of the white BCM plug to Pin 17 (check, it could be pin16). I'm assuming you already have the earth cable attached or you won't have the brake light or number plate lights.

I couldn't find the correct terminal to go in the BCM. It's the largest size pin 6.3 mm wide. If anyone knows where to get this terminal, please post on here. I used a pin from a BMW who I work for, but it doesn't click in correctly.
D

Hi, we've just done this conversion to our van, but have found that a genuine tailgated van has a much stronger (thicker, 3mm double-skinned plus the spreader plates) roof/closing panel - where the tailgate hinges go.

So even with the genuine spreader plates fitted, there is still way too much flex as you open and close the tailgate.

I'm concerned that after some use it's going to seriously weaken/fatigue it.

Has anyone else noticed this? The whole point of the conversion for me was to add a genuine or fiamma bike rack, I'm not sure about the extra weight now!
Has anyone converted to tailgate and then added 4 bikes?

Dave Williams said:
Hi, we've just done this conversion to our van, but have found that a genuine tailgated van has a much stronger (thicker, 3mm double-skinned plus the spreader plates) roof/closing panel - where the tailgate hinges go.

So even with the genuine spreader plates fitted, there is still way too much flex as you open and close the tailgate.

I'm concerned that after some use it's going to seriously weaken/fatigue it.

Has anyone else noticed this? The whole point of the conversion for me was to add a genuine or fiamma bike rack, I'm not sure about the extra weight now!
Has anyone converted to tailgate and then added 4 bikes?

I did notice flex when I was using uprated Gas struts, but hadn’t measured the difference between a barn-door and tailgate van.

Again, not sure what the solution would be. 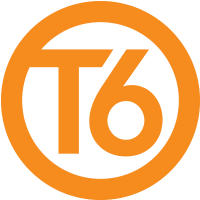 ‘Light Out’ warning on after tailgate conversion.

I've converted my barn doors to a tailgate with LED lights. But I have a orange warning for bulb out on the instruments. VCDS scan showed no fault codes. If I go into 17-Instruments and go into measured values, what should I be looking for? The only concern I've found is "Status on input...