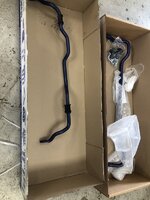 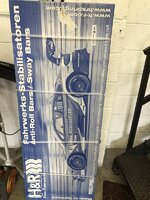 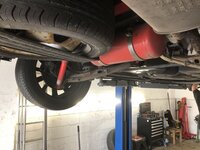 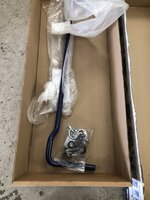 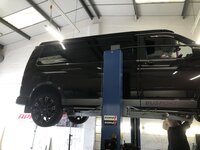 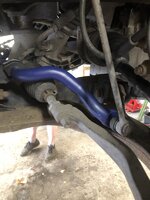 Have the ARB's made much difference to the handling, I'm guessing it was fairly good anyway with the Koni shocks?
M

I have standard shocks, H&R springs and ARBs. handling is amazing....
N

VIP Member
T6 Pro
Same as you Mikem and agree fully. Will go the coilover route soon though
T

T6 Pro
Thanks to Steve my T has them too. Pretty impressive upgrade one doesn't want to skip on the 'T6 to do' list.

VIP Member
T6 Guru
Ohhh! very nice! I'm tempted to fit those but maybe after everything else!
Last edited: 21 Oct 2020

DaveD said:
Have the ARB's made much difference to the handling, I'm guessing it was fairly good anyway with the Koni shocks?
Click to expand...

The handling is superb With the Koni shocks. These have just made it a little stiffer when cornering there is a lot of weight up top in my pop roof and bed.
J

VIP Member
T6 Legend
Excellent post! Great pics too. It also confirms for me that going to @CRS Performance to have Koni and H&R fitted is the right decision. I will post an update next week following my 2-hour plus drive home!!

What’s the fitted price if you don’t mind me asking?

My needs are quite simple - improve the driving comfort and remove the "skippy-ness" when driving. I'm not looking to lower my 2018 California as I occasionally tow a hoofing great big twin-axle caravan. The Cali is also our "family car" and it is running on 235/55/R17 Michelin Cross Climates.

So, the day came to visit Steve and his team in Cannock and I took my young lad (aged 8.) We were a few minutes late but were directed straight onto the ramp. Two office chairs were wheeled out to give us a front-row view of the work being undertaken and a very welcome cuppa. (Yes, we had the foresight to bring the biscuits - an army marches on its stomach after all!)

Initial measurements were taken: van was 20mm down at the rear and 10mm up at the front. This was essentially unladen weight of a factory California. Up went the ramp and a quick squint underneath: "Ooh, that's a baby!" or words to that effect was the assessment of the rear anti-roll bar. (It was 22mm, the lightest bar for a Transporter, yet it was put onto a California with all that glass and a pop-top raising the centre of gravity???)

No messing about, Koni Active shocks and a set of H&R antiroll bars were put on to replace the originals equipment. This is a slick operation: removing old, preparing new, fitting and checking fitment all happening in parallel. Questions and photos weren't an issue during the work. (They even refitted the wheels I had put on in the wrong rotation.........can we just gloss over that bit, eh?!?!?!!)

Then, it came to checking the levels/rake. Drop the van, meansure it, lift the van, adjust it..........have the work peer-reviewed.......until all were happy. Only then did the LED levelling sensors go back on with new bolts. Steve then takes the van for a test drive before handing it back to us to test drive (yes, he did come with us!) Push the van into a roundabout.......find a pothole..........stand on the anchors.......etc etc!

After a couple of hours of mainly motorways, I finally got to the hilly A-roads before home (approximately 15 miles) and this was where the results of work became properly noticeable. My Cali was now close to "car like" handling. No longer did I feel like I was driving an epileptic armchair mid-fit with the backend twitching while I grip the steering wheel to remain in the seat! (Actually, previously I wondered whether it was my backend or the van's that used to twitch the most!)

Then came the real test: have Senior Management (Domestic Front) drive. Within a few hundred yards: "Yes, that feels different!" After a roundabout (taken normally): "Ooh, that's much better!" Over supper: "That was worth the money!" And, from the back seat my youngest (aged 6) piped up: "It's a lot smoother and kinda like Mummy's car!" The most telling comment was later (again from Senior Management): "Don't you feel a bit aggrieved that you have to fix what comes out of the factory? They should know enough about what a California is used for by now!"

So, some pointers for those considering going down this route:
Finally, thank you to the team at @CRS Performance for the work done and the care taken.

Trade Member
T6 Guru
One has to ask what VW are thinking having such a high centre of gravity on these California's and NOT fitting the T 32 Anti roll bar at the very least ??
Also why they deliver these cars with the rake 20 to 25 mm out , the mind surely boggles
Clearly the techie guys are confused by Roll centres and centre of Gravity ?? Never mind we will continue the fight to put them right ?
J

CRS Performance said:
One has to ask what VW are thinking having such a high centre of gravity on these California's and NOT fitting the T 32 Anti roll bar at the very least ??
Also why they deliver these cars with the rake 20 to 25 mm out , the mind surely boggles
Clearly the techie guys are confused by Roll centres and centre of Gravity ?? Never mind we will continue the fight to put them right ?
Click to expand...

Ah, Steve, don’t be too critical of your business development team!!! As long as the factory gets it wrong, you have a flow of customers inviting you to “make it go away!”
You must log in or register to reply here.

My Trip to CRS Performance
2