VIP Member
T6 Guru
For the 2nd time, since being installed as part of a conversion (November 2018), my Webasto Air Top 2000 STC B (petrol) has failed.


The symptoms are problems when starting, though it did eventually start, followed some time later by tripping and giving the F 02 error code (Flame failure - at least > 3). This could be reset, and it would run again for a while before tripping again. I even had it running at maximum temperature setting for 28 minutes (yes it was getting hot in the van by then) in an attempt to burn off any soot deposits in the exhaust (as advised by my installer after the last “issue”), but it still tripped off. After one more attempt (20 minutes this time) it tripped off for the final time showing 12 flashes for “Heater unit lock-out”.


When this started last night, I had just under ¼ tank of fuel, so still well above the red line, but I was planning on filling up anyway, and managed to put 58 litres of Shell V-Power in the 80 litre tank, which confirmed the gauge reading. So I would like to think that this hasn’t been caused by the fuel level being too low, and air getting in the heater fuel pipe.


On the last occurrence, the installers were a bit non-committal as to what the problem was, but did say that the exhaust was quite coked up, and advised me to run the heater at a higher temperature every now and again to clear it. This was at the end of summer, and while the heater had been on frequently (I sleep in my van 2 – 3 times a week), it often only switched to heat for a short time in the early hours. They said that this “light” usage could be promoting the coking up of the exhaust, which I find a bit disappointing as that is how I need to use my heater.


One other thing that was suggested, was the Prins Injector Care fuel additive that I am advised to use once every 10,000 miles to care for the LPG conversion also on my van.


So, can any of the heater gurus out there offer any advice on what may be going on? Is it the light way I use it, the fuel additive, or an air blockage? Is it something else or do I have a defective unit?

VIP Member
T6 Guru
Get the installers to check the CO2 level in the exhaust for a start. It may need adjusting although they should have checked that after installation.
It could be the way that it is being used - they don't like continuous usage on low heat. If you continue to use it like that you should really be servicing it annually with a burner pad change. I have noticed that the few petrol models that I have had in have always been coked up, usually at lower hours than the diesels. This may be due to additives or may not, technical docs say that normal additives that are in fuel has no known effects but injector cleaner types are most probably not included in that.
CO2 level:
CO2 in exhaust gas (permitted function range)
1 kW ...............5.0 - 8.0 %
2 kW...............9.0 - 12.5 %

VIP Member
T6 Guru
Thanks for that.
Though I have a question about them not liking continuous usage on low heat - surely that's their primary purpose, at least in a campervan installation? I mean, in summer one will often need some heat in the eraly hours, but not a lot (& most people will only be using them in the summer), and even in winter, it doesn't need to be burning all night long to give a comfortable 18 degrees in the van.
So, what would be the best heater for such use then?

VIP Member
T6 Guru
The best way to run them hotter is to crack a window open. I have never needed a heater in summer even with the UK's dire weather and I wouldn't be able to sleep with 18° at night! 10 - 15° is more than enough. Still have windows open at -10° . I have never seen the need for continuous heating all the night when all you are doing is warming your nose! I only use my heater for the times when I am just sat in the van for an extended period/ first thing in the morning which may well be at variance to how some people use them.
Have you serviced yours since installation? ( People seem to forget that heaters need maintenance just the same as the vehicle)

I use my van as a mobile bedroom, and sleep in it 2-3 nights a week while working away from home. I have a California Beach type day van conversion, so no kitchen, but low level side storage units. I always leave the front windows cracked open, to help with condensation, though I use a cab curtain. Yes, 15 deg is warm enough. I only upped it to 18 after the last issue when I was told that it hadn’t been burning at a high enough intensity. However, I do leave it on all night, to maintain that temperature, rather than have to turn it on because I’ve woken up cold. I don’t want to live the camping experience every week! Is this wrong? Am I expecting too much?
Mine was installed in November 2018, and hasn’t been serviced yet, though it has been back after the first failure last October when it was given a thorough looking at.

VIP Member
T6 Guru
So here my combustion chamber. Pretty coked up considering it was thoroughly cleaned back in October. Also bearing in mind it was run at max for 28 minutes shortly before it locked out.
However, we are not sure if it has been running properly, but they are running tests on it now. 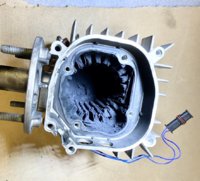 VIP Member
T6 Guru
The only times that I have seen an exchanger that coked up was on a diesel where the owner used diesel that had been stored in an oil drum and so was contaminated and on one petrol model when the CO2 level was incorrectly set so was burning far too rich. What is the burner pad and tube like? It should only have a light dusting of carbon with the majority of it bare metal.
If that was cleaned in October there is something wrong there. Either contaminants in the fuel or too rich. Make sure that they set the CO2 so that it is within the above limits.
Is the combustion air intake pipe blocked with a dead mouse or the like as this could make it run rich.

VIP Member
T6 Guru
The fuel is Shell V-Power, and while there was some Prins injection cleaner in an earlier tank (needed for my LPG system), there was none in the last tank or current. This is the only other photo I took (I’m not familiar with what is what), but the CO2 is being looked at as they believe it must be wrong. 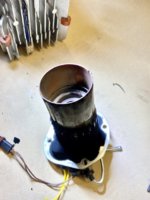 VIP Member
T6 Guru
Even a lot of low running shouldn't cause that amount of carbon. No amount of high heat setting running would clear that. Presumably it was a new unit so there shouldn't have been any need for the CO2 needing adjustment after fitting so it must be a duff one from the factory ( Very unlikely but only answer other than the injector cleaner) It would be interesting to see the CO2 readings from it.
The fact that the end of the burner tube has no carbon is odd - that area looks like a normally running one.

VIP Member
T6 Guru
So after trying a new fuel pump, which made no difference (they were seeing a puff of smoke from the exhaust as it started and stopped), the suggestion from Webasto was as commented above, and that was to measure the CO2. This proved to be too high, and so they adjusted it and it all seems to be running better now. Apparently they would not have been expected to adjust this on a new unit, so all the diagnosis work has been covered by the Webasto warranty.

I must say a thank you to Exploria for their efforts in resolving this, and also Webasto for their support. Not to forget of course the feedback from @oldiebut goodie, that provided a 2nd opinion to the process.

Shaun Witts said:
So here my combustion chamber. Pretty coked up considering it was thoroughly cleaned back in October. Also bearing in mind it was run at max for 28 minutes shortly before it locked out.
However, we are not sure if it has been running properly, but they are running tests on it now.View attachment 58450
Click to expand...

Interestingly I have just got a new diesel unit in with one hour and 17 minutes working time from new and it is as coked up as that one. This is going to be either oil/contaminants in the diesel or it may be the same as yours and the co2 level is wrong. Won't be able to tell until I have decoked it and got it on test and check the co2. If it is the co2 there may be a problem with other recent Webastos generally.

VIP Member
T6 Guru
Could be of concern for those who don’t use the heater so often as it could be some time before the problem manifests.
I’m still using mine 2 - 3 times a week, and it is running fine. Mind you, I do now turn it up to max when my alarm goes off, while I get up & get dressed.

VIP Member
T6 Guru
Dirty diesel is my verdict on this one here - co2 just off the top end for this heater ( max is 10.8% , petrol ones is higher), will knock that back down a touch to get it back to factory spec. 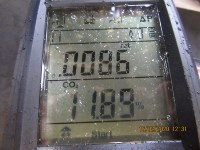