Hi guys,
We prefer where we can to wild camp rather than staying on sites with hook ups. As a result we decided that it was worth having a portable toilet in the van for VERY limited use!
Anyway, we bought a thetford 345 thinking that it was the smallest one which, when split into its two halves, would fit under our bed. We were wrong. The bed is a crash tested rail system bed so there is a lot of steelwork underneath which restricts the space. The larger part of the porta potti won't fit by maybe 2-3mm, very frustrating.
Does anyone have the measurement of the Thetford 335? It's the upper section I'm interested in as the lower tank piece fits under the bed easily.
Could someone measure the top piece? The 345 is 240mm.
I fear that they are all the same and that it's only the tank which varies.
Alternatively if someone can suggest another make which splits into smaller sections then we might just have to buy a new one and return this one (unused!)
Cheers guys.

VIP Member
T6 Legend
For that very same reason I got one of these Throne 12L Camping Toilet
Fits easily under the bed in two halves for transport and under the bed at night when ready, so you don't trip over it.
Compact and flushable.

VIP Member
T6 Legend
If your splitting it to fit. Then do you need the lid?. Will that gain your 2/3mm. Maybe replace when out for use?.

Sabre, Can you let me have the size of the biggest half once split?

Fish,
I was thinking that removing the lid might just do it. I'm not keen to start pushing and shoving it into place if it's going back to the supplier but that might be the best solution.
Cheers.

VIP Member
T6 Legend
@Andrew Wilkinson I'll measure it up tonight for you.

@Sabre.
Thanks for that.

Not All Who Wander Are Lost

Andrew Wilkinson said:
Does anyone have the measurement of the Thetford 335?
Click to expand...

Remember when you split the unit, the release lever assembly projects below the join line at the back. (It also protects the rubber seal that joins into the lower half when placed on the ground). This means when the top half is sat on the ground, the rear is higher.

I have just measured ours sat in this position and it is 222 mm at the highest point which is the back edge of the lid by the hinge.

Removing the lid and seat saves you 4 mm at this point - because it is only the thickness of the hinge mouldings you are saving - giving a height of 218 mm.

Top half (bigger half)
41cm long X 37cm wide. Yup slightly wider.
This is due to the clips that lock onto the bottom bit.
For storage the bottom half is 21cm tall with the clips folded underneath. 19cm in the main body with the clips out wide but getting in the way!

Hope that helps a little. 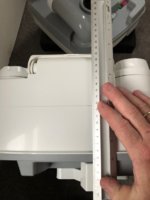 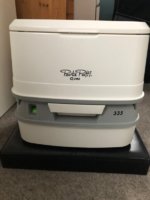 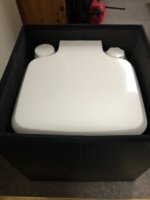 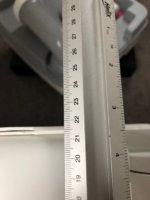 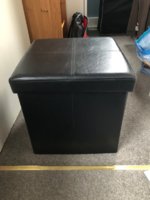 Thanks #Loz, it looks like the 335 will fit nicely. We bought our 345 from Jacksons Leisure who have agreed to swap to the 335 if it is better so we're swinging by there on Thursday on the way to Wales.
Thanks for the help all of you, it always amazes me how supportive this forum can be!

You must log in or register to reply here.

Hello and A Question For Monte Carlo or St Tropez Owners.