VIP Member
T6 Legend
I would speak with colin @VWVC and ask him to get you a full set..

VIP Member
T6 Legend
Cheers @Fish I was considering using TPS for the covers. Would Colin be cheaper?

VIP Member
T6 Legend
Should be! But colin also knows what he is doing and will supply everything you need from bolts to cover trims.

Wills said:
My Cali rail ali caps are scabby so intend to replace them.
Can anyone confirm the part numbers for the ali finishing covers for the floor rails please? Maybe @Pauly ?
I have three rails and the inners all look the same as do the outer caps.
The web site I've looked at is confusing as it quotes different numbers unless I'm confused..
Do I just order

@Wills these are the stickers on my floor rail covers - 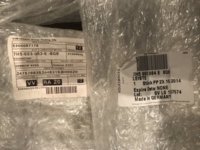 VIP Member
T6 Legend
Cheers Adam, I took a couple of the caps off as they have their part numbers stamped on the underside. All sorted now thanks
You must log in or register to reply here.