VCDS Or VAG-COM is a fantastic piece of windows based software and hardware created by Ross-Tech over in the states for VAG Group based motors.

The great thing with this setup is that once you buy the GENIUNE Hardware cable the software and all future updates are free. =]

I've had the VAGCom setup since about 2010 and to be honest for the money its the closest thing to the dealer tool you can get.

I have the older discontinued HEX-USB+CAN and have been using it for years, i have the software loaded onto a few different Windows laptops and even a Win10 based Tablet (must have a full size USB port!)

It Is possible to run the software on a MAC,
@kn0bby has done this: I use my Macbook Pro and just run Parallels to run a Windows 10 image with the VCDS software installed within in

@Loz has done this:
I run vcds on a virtual windows 7 pc running on vmware fusion on my MacBook Pro. Working perfectly.

@andys advice was: I’m like you and Mac only, so when I got VCDS I tried using Windows in both Parallels and Virtual Box and couldn’t get the program to work properly. I object to chucking money at something I don’t need for anything else so I bought an older reconditioned Dell Win7 laptop from eBay for £120 and it’s been absolutely fine

So what can it do? well most things really
Read fault codes,
clear fault codes,
read long module coding,
change module long coding,
bi-directional communications,
activate systems on the van,
it can also activate the fuel lift pump (if you run out of derv like i did once!!)(you cant do this with Carista ! - so dont run out of fuel unless you want a call-out)

basically anything you need to do on the van apart from programming some of the secure modules and flashing ECU`s etc.

Though there have been some blips with the latest MY19 vans . . . .

one interesting point may be the New "diagnostic firewall" . . .

I read somewhere, not sure how true it was, that vw had introduced a security measure to stop wireless hacking, by needing the bonnet, (hood) to be open to accept coding. The other thing I changed was I reset all the previous attempts back to default, and then made the change through coding and not Adaptation. Bingo! Seems be working every time now . . . . . . . . . The "diagnostic firewall" with the hood shut is definitely something that exists on very new models. I'm not sure if it applies to your Transporter, though, and VCDS is also supposed to detect and inform you if the diagnostic firewall function is active.

and @mmi - For details look into Autoscan in the link. For some modules in a MY19 T6 --- "Unsupported vehicle.Please upgrade to a current Ross-Tech interface."


These blips are normally ironed out by RossTech with new software updates for VCDS in due course, so dont panic. 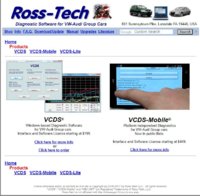 There are other alternatives, but we can look at those later.


the chart below details the main differences: 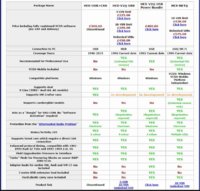 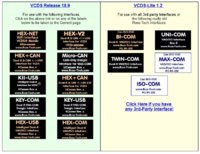 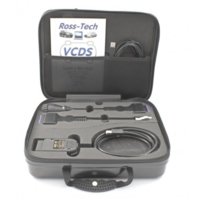 The HEX-V2 is available in 3 versions:


This product is the home user (3-VIN) version and may only be used for advanced functions on 3 cars.

For enthusiast use, please see the 10-VIN package.

For professional use, please see the Unlimited package.

VIN Limits:
Only some VCDS functions are restricted to use on a specific number of cars on the 3 and 10-VIN limited interfaces. Basic functions may be used on as many cars as you wish:

Unlimited functions:
A VIN-Limited interface can do Auto-Scans, Clear DTCs, and look at Measuring Values on an unlimited number of cars.

If you directly connect to a control module (e.g. Select > 01. Engine), VCDS will ask if you wish to store the VIN, but selecting No will still allow the connection to continue.

Limited functions:
Essentially functions that actually change things in the car are VIN-limited:
VCDS will never count a VIN toward the license limit without the user's explicit permission.

It will always ask you first, thereby giving you the opportunity to decline to "register" a VIN in the interface.
For more information on VIN limits please see this VIN FAQ on the Ross-Tech forums.

Using VCDS on a Windows PC, you can:

The HEX-V2 packages do NOT offer Lamborghini coverage, which is only available with the HEX-NET.


Also please note coverage for the Volkswagen Crafter / LT3 is not as comprehensive as other VAG models, as the diagnostics systems are based on the Mercedes Sprinter.

Ross-Tech have some function information on this page, but if you require coverage for a specific function we would recommend posting a question on the Ross-Tech forums (including the VIN of the vehicle) before purchasing to check support.

Please note that the HEX-V2 interface does not ship with software on CD - the full, licensed version of the software can be downloaded on receipt of the interface (full details provided with interface)


The minimum system requirements for the VCDS software are:

Slower computers or Windows 2000, XP and Vista may work but are not officially supported. 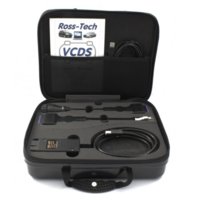 The HEX-NET is available in 2 versions:


That all very nice, but what else could i use?


Heres a quick look at the VCDS NEX-NET


That was nice of Gendan.co.uk to include some sweeties . . . . (the kids very very great-full)

.
The HEX-NET has a USB or WIFI connection to VCDS,

it looks like they have now got a V2 hardware device where the USB cable can be screwed into the device like the cabled version. Also a nice corner pin so you can attach a lanyard to it so you dont forget and leave it in a customers car, . . . . Good move RossTech =]
.

.
Its slightly larger that the Cabled version,
.

It seems that MY19 and onwards will require new/latest generation VCDS interface eventually – HEX-V2 or HEX-NET.

Still is partially unclear if using "old" interface the tweaking functionalities are still available on “old” modules installed on T6. A sample Auto-Scan in the link ---> VCDS & T6 MY19 suggests that the following modules possibly still could be coded using older interface (as not reported "unsupported"):

VCDS User
Admin
Moderator
I connected my lead to an MY19 a couple weeks back and had this issue, I appeared to have all adaption/coding options available (I didn’t go through many modules though) but troubleshooting was limited and the stored fault codes were only showing me a very basic description with no more info available

Very informative. I've been looking to get hold of a VCDS or similar as I've just carried out first of my upgrades, OPS system and need to set it up.
There's so many options but looking at it, the official Ross-Tech seems the safest route.

Do you know if any of the distributors are offering any sort of discount to forum members?

Any changes worth noting?

andys said:
Any changes worth noting?
Click to expand...

Being obsessed of tracking how things progress under the hood

– now I can take a snapshot of all available measurement values and adaptations of all the modules in the vehicle with just one click. ---> Ross-Tech: VCDS: Current Beta

VIP Member
T6 Pro
Has anyone had any experience of Ancel FX3000 or Foxwell NT624 Elite scanners / readers or similar. They have not got all of the features of the VCDS but will work on more makes of cars including resetting and winding back the brakes. This suits me more as I do work on all sorts of cars. They are nearly all sold by British sellers with Chinese addresses which is a bit off putting.
Cheers Baz

you can use them for basic service requirements and code scans on most makes of cars.

I have a couple of AUTEL units and a SNAPON scanners that do similar.


They are great for the basics as you have mentioned above,

but will not allow detailed code scans or coding like VCDS.
M

Is this any good?

www.djwwautodiagnostics.co.uk
You must log in or register to reply here.