Led Fog Light Upgrade (dual Colour) - How I Did It -

Following on from @3shotdave original post about "New Led Fog Light Bulbs" i though i would give it a go.

I liked the idea of the two colour fogs so though i would give it a go.

a quick look over at Autobeam seemed to look genuine and a fairly good quality.

the bulbs in question were:


What is switchback?
White LED Fog lights look great but are not always the brightest choice for foggy conditions. The Autobeam switchback fog gives you the ability to switch between two different light temperatures whilst driving, a bright white LED driving light plus a strong yellow LED fog light for when you need it most.

You're in control
Changing between modes is easy, every time you want to change the mode, turn your fog lights off and then on again, leaving the unit in the off position for 5 seconds will reset it. 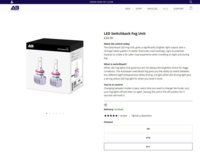 
As @3shotdave said it was a case of navigating the site and selecting you poison.

The lamp unit comes with a solid aluminum heat-sink on the rear with a small functioning cooling fan!

next to that was the small LED DRIVER box, then a short run of cable to the VW OEM connector (sort of, but more on that later)

fitting the lamps is super easy, its just a case of turning the steering wheel full lock to expose the black plastic fog light cover in the wheel arch liner, and them popping it out with a good beefy trim tool (or a rough old flat blade screw driver in my case, what can i say . . . . its what i had to hand) which relieved the rear of the fog light assembly.

Next was to unclip the existing bulb connector, a VW 2pin spring release connector, a big squeeze on the tab and a sharp pull and it was free.

the existing bulb rotated 90 degrees and it was out.

a close look at the LED plug showed a + and - symbol on one side of the connector, so we just matched up the - symbol with the Brown feed wire on the OEM loom plug. . . . . . all good so far. Now for a test.

This was the first test:

We have OEM LED headlights, the left FOG (as you see the picture) was the Factory OEM H11 Halogen, the right was the New LED on default WHITE setting. . . . MUCH crisper & brighter very nice =]

Next was to try the YELLOW, a quick flick of the Fog light switch gave us this, an instant change from bright white to yellow!!! "That the Nuts i thought"

Ok so that workout great, now lets move to the other side. Following the same procedure, wheel on lock, remove rear cover, disconnect loom, twist out old bulb, . . . . refit new LED. We have this.

Both LED Fogs fitted and running on default BRIGHT WHITE.

You're in control
Changing between modes is easy, every time you want to change the mode, turn your fog lights off and then on again, leaving the unit in the off position for 5 seconds will reset it.

Tried that and it worked, reset back to nice BRIGHT WHITE, withing about 3 seconds.

We also tried the TURN FUNCTION as the factory H11 lamps dimmed down after being on for cornering while driving.

and yep these were the same, they dimmed down nicely - Superb.

VCDS User
Moderator
VIP Member
T6 Legend
So what do these lamps look from for the other angle.

we lets have a look.

So there we have it.

I must say, so far i am very impressed.

The bightness, coulour, build quality is all very good.

lets see, but for now im a very happy bunny.

Spaghettiboy78 said:
Any bulb out warnings @Dellmassive ?
Click to expand...

No warnings yet. Tomorrow's drive will be a better test.
S

VIP Member
T6 Guru
nice @Dellmassive ! quick question - as I've changed my bumper for a highline with fogs, and i didnt have fogs before - i dont have this fancy trap that i need to open to change bulbs... do you know if i can manage to do the change without our do i need to replace this part (the wheel arch liner?)

scotia said:
nice @Dellmassive ! quick question - as I've changed my bumper for a highline with fogs, and i didnt have fogs before - i dont have this fancy trap that i need to open to change bulbs... do you know if i can manage to do the change without our do i need to replace this part (the wheel arch liner?)
Click to expand...

Good question. The trap is just the access panel through the liner to get to the bulb. If you dont have it i supppse you could remove some the liner screws to bend it out of the way? But its tight, so you may need to remove the wheel first.

To give you access to the rear of the fog light pods in the bumper. I'll do you a couple of pics later just to clarify.

Obviously the best option moving forwards would be to swap out the liners for the correct ones, though I'm unsure of the cost.

But if you don't mind jacking the van up and removing the wheel, loosening the liner Etc . . . . I suppose it depends how long the bulbs last and how often you needed to access them.

VIP Member
T6 Pro
Just when I thought I'd stopped spending on the van for a while.........

I like the idea of them flashing orange with the indicators

Not All Who Wander Are Lost

andys said:
but the yellow is gash
Click to expand...

Yellow light supposedly penetrates further because of its long wavelength, but it's still much smaller than fog particles. The scattering effects of fog are essentially independent of wavelength. Any color would do just as well.

Yellow colour hits the retina at the right point. It is easy for us to process it. And, that’s why fog lights with a yellow colour are preferred by car drivers, especially in bad weather conditions. Yellow colour is less frustrating for the eyes than blue or white shades. The purpose behind using selective yellow light is to improve perceived visibility.
Last edited: 11 Jan 2019

andys said:
The white setting looks a good match but the yellow is gash

The yellow is for FOG and SNOW. And white for normal..

So just need to wait for FOG or snow To test the theory.

VCDS User
Admin
Moderator
VIP Member
It could be an urban myth, but I think using yellow filters out the blue that make the reflection worse...