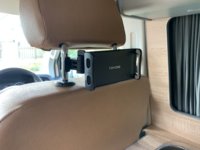 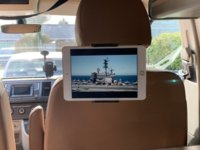 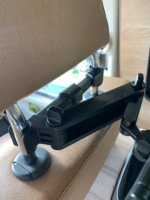 For months I have been researching what the best set up would be for watching TV in the van during these cold winter nights.... (yes I know to many the whole idea of TV is verboten)

There’s lots of threads where people have got either Cello or August LCD set ups which they are happy with, but the whole faff of having to find a signal for the tv or download films on a USB stick wasn’t for us.

We settled on using the wife’s iPad mini and either downloading content from Netflix or iPlayer in advance or (where there is good 4G) tethering to our phones for live streaming (we have a 100gb data allowance). Pleasingly we haven’t stayed anywhere in the UK yet where we have not had a decent 4G signal.

I did a lot of research to find a decent bracket that would hold the iPad in place behind the driver/passenger seat that was robust enough to support the weight but wasn’t going to break the bank either.

I settled on the ‘Tyrone’ bracket from Amazon, which for £11 I didn’t think was too bad, especially when I nearly shelled out £60 on another ‘camping community well known brand’ .
We’ve been on 4 trips now using the bracket and so far so good. It extends enough that when we are tucked up in the rock and roll bed we can see the tv without the use of binoculars. Always a winner in my view.
The blurb says it would accommodate a standard iPad size.... I’m not convinced, although I haven’t tried to be fair.
Certainly iPad mini m, Amazon fire, Samsung tablet no problem.

Overall very satisfactory for the price
You must log in or register to reply here.