hi all just joined the group.

I just paid for a T6 150 BHP van which will be converted within the next few months.
I have until monday to chose a colour and have been doing my own head in weighing up options so thought I'd ask advice from the pros.

initially I'd thought black but worried about it looking too much like a van on the road without the window definition. and the conversion guy referred to them as a hearse which really put me off (although maybe a sideline business)! : )

so the choices are indium grey (unlikely as my brother has one), bamboo green (currently the front runner as it looks great just worried it looks a bit washed out in sunlight), Acapulco blue (my friend put me off this as he says theres so many blue cars on the roads) or starlight blue (actually love this but read on here about scratched and keeping clean issues).

thanks for any help

thanks for that! what colour do you own?

rickstar said:
thanks for that! what colour do you own?
Click to expand...

T6 Pro
I've found starlight blue to be no better or worse than any other dark colour to keep clean (always owned black or grey cars) and any dark colour tends to make chips more visible. The bamboo green was my (very close) second choice... go green! 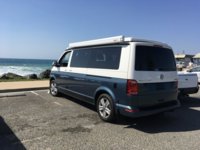 T6 Guru
I have Mojave but went to order a blue one . In the sun light it looks great a lighter grey than indium and does not show the dirt . They had one at the dealer and it court my eye. I think you need to see it but not many about .

VCDS User
VIP Member
T6 Legend
Also, don’t forget if you’re going down the camper route, the darker the colour the hotter it will be in warmer climes. Don’t go building yourself an oven.

Salty Spuds said:
Also, don’t forget if you’re going down the camper route, the darker the colour the hotter it will be in warmer climes. Don’t go building yourself an oven.
Click to expand...

I agree there.
Mine isn't a camper, but it is a works vehicle, and we carry a lot of products that can be temperature critical, so we have two temp gauges in the rear of the van to monitor things, and i've seen both nearly hit 50c on really hot days.

rickstar said:
thanks for that! what colour do you own?
Click to expand... 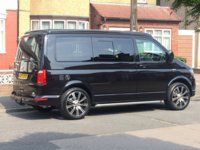 There can only be one choice..
the fastest colour....

T6 Legend
Here's the thing, whatever colour you choose, it'll be the wrong one... I didn't make the rule up as it applies to just about every component VW attached at the factory, you change them all in the end.
Regarding darker VW T6 colours most only pop to reveal their actual colour in bright sunshine and you can see this as you sit outside your camper instead of melting inside... Chestnut Brown here!
You must log in or register to reply here.