So its that time of year, work is busy, its cold outside, the kids are screaming, the missus wants a new kitchen, blah blah blah.

So the last thing on your mind is checking your vans fluids right.? or more to the point the oil. !

Well lucky our modern vans have sensors that detect these misgivings and helps us on our blissfully merry way.

So imagine my surprise today when the orange "Check Oil" light popped up. . . . . . . oh jees i thought, yeh i forgot to check my levels. Having my third T5/T6 now and 11 years of "transportering" i know that normally the engine oil needs topping up halfway through a 12000mile oils service scheduled.

So here we are then, 8258miles from new and 4200miles from the recommended oil service date.

luckily i always carry a 1ltr bottle of oil in the van. this one come with the van from new from the dealer.

Checking under the filler cap we see no white emulsified cheese, this is probably due to the 4 or more hours a day of engine running i do keeping the temps up so the gunk doesn't form in the filler neck.

as expected we can see its right at the bottom of the bulb, now this doesn't mean we have no oil, it just means we are low-on-oil. The engine takes about 7ltrs of oil in total. the dipstick just represents the upper section and even the low point would still leave about 6ltrs of oil in the sump.

So its time for a topup.

A small funnel helps with filling and keeps the engine free from drips and spills, the whole 1ltr was added and left for a few minutes to settle into the sump.

Note that the engine was already warm, this helps the new cold oil flow into the sump quicker . . . .

So the moral of the story is check your levels !!! Expect the oil to need topping up half way through its service intervals.

Remember and engine consumes oil at an expected rate during normal operation, thats normal. If you had excessive oil loss shown under the expected mileage then its either leaking or being consumed at a higher rate due to internal wear and tear. External oil leaks manifest themselves as drops of oil under the van and internal loss is normally a blue smoke out the exhaust if its getting into the combustion route or emulsified oil/water if its getting into the water jacket (say from a failed EGU cooler)

Its lucky we have oil-level sensors these days, in old times we only had the red "oil-can" light . . . . which people assumed was a oil level warning and to maybe check-it-next week. Unfortunately that little red oil-can was a main gallery oil pressure sensor, ignoring that could be fatal.


The oil recommended by the dealer is Castrol Magnatec 5w 30 fully synthetic, long life 7lt's of it per oil change! (Or any oil that confirms to VW505/507.)

25K miles oil service period if set to long-life as the sump has an oil-quality sensor that monitors the soot/gunk level of the oil and adjusts the MFD service readout.

some people decide to ignore the long-life 25k and end up doing it every 12K anyway, which is no bad thing.

Oil specs and what to use

Welcome to my world...

VCDS User
Admin
Moderator
VIP Member
Same mpg as me at the mo..

VCDS User
VIP Member
T6 Legend
This is our 204ps dsg 4mot conversion on the motorway. ACC set to 65mph. The van weighs in at a shade under 3000kg. Over 700miles range on an 80l tank full. 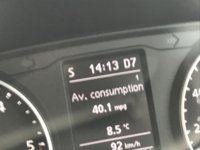